One of my biggest challenges (and goals) in teaching high school English has been helping my students learn how to write well—not only to write coherently in an organized manner (that is a huge challenge in and of itself!), but also to construct thoughtful arguments that actually help them discover depths in literary works and in themselves that they did not know existed before. This is quite a lofty and somewhat idealistic goal, and I wasn’t sure how successful I could be during my first year of teaching.

I asked some of my former teachers for suggestions, and many of them encouraged me to allow students to write about the “things they are interested in”—their own personal lives, their experiences, the music and/or issues they were concerned with. Such an approach seems in line with the claim that “students perform better in academic settings when they use concrete manipulatives and when they are able to draw on their practical, real-world knowledge” (McNeil Syllabus). You know, the universal “What I Did Over my Summer Break” essay at the beginning of school, or the “What’s My Favorite Sport/Movie/Food/ and Why,” etc. etc.

However, as an English teacher, I often ask myself what really is “real-world knowledge”? Most people don’t think that the sonnets of John Donne or the adventures of the mythic Beowulf really qualify—and that is, at face value, true: students don’t usually relate to such things immediately. (“Ms. Shea, why we gotta read this?” “Yeah why do we always read old stuff?” “It’s too hard for us to understand!” “Can’t we read something modern–like Nicholas Sparks?” “Can I write about a song instead?”)

Presumably, students would relate much better to modern poets or—better yet—modern music artists. But are modern music lyrics any more “real” than the poetry of Donne and Shakespeare? Are they less? 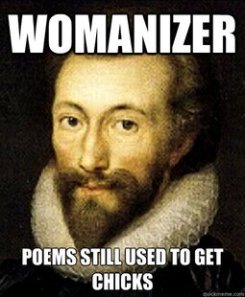 I have found that instituting a very simple classroom procedure called “In-Class Essay Fridays” has helped me more than any other teaching method or practice. Every Thursday I post the essay prompt for homework—they are responsible for bringing two possible thesis statements to class. I also encourage/require some of the struggling students to bring in an introduction paragraph to give them a head start. Every Friday, my students know they will be writing an in-class essay—an experience that used to cause them a lot of stress and frustration. But it has quickly become part of our weekly routine. I am able to give them a lot of individual help while they are busy writing.  Their writing has improved exponentially—but there is no real secret. The consistent practice has helped all of them.

The essay topics usually consist of a poem or passage to analyze. I have not really given them particularly “relevant” prompts—in the popular sense of the term—but strangely, John Donne, George Herbert, Andrew Marvell and Jane Austen have started to become part of their “real world.” One student said to me, “Ms. Shea, I think I want to write about Marvell instead of Herbert, because Herbert is such a good person! I don’t know if I can completely relate to him.” This student eventually decided to stay with Herbert nonetheless, and she wrote an illuminating essay.

As Mayer explains, “children seem to learn better when they are active and when a teacher helps guide their activity in productive directions” (16). But my in-class essay Fridays do not include many of the often celebrated activities like group work, or fun manipulatives, or even class discussion. Nevertheless, it seems to me that this weekly tradition really stretches, challenges, and engages my students: “the kind of activity that really promotes meaningful learning is cognitive activity (e.g. selecting, organizing, and integrating knowledge)” (Ibid. 17). Klhar and Nigram’s third hypothesis, that what is learned is more important than how it is taught (662), seems to be revealed here. I give my students careful individualized attention and advice on these Fridays, often in the form of direct instruction, and yet I have found it to be the most successful teaching practice I have engaged in thus far.

I’ve felt a lot of pressure as a new teacher to be “cool” and have music playing in my classroom, or use Youtube videos a lot, etc. And sometimes I do these things, and they work, and it’s fun.

But I am beginning to think that sometimes simpler is better, since a large part of my students’ writing success has to do with the ritual or weekly procedure—“In Class Essay Fridays” have become a normal part of these students’ lives. I am more concerned about helping my students feel safe within a context of challenging procedures that, through practice and consistency, will seem far less threatening.

Flannery O’Connor has a comment that seems particularly relevant and incisive here: 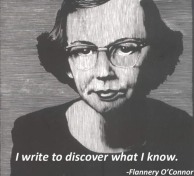 “English teachers come in Good, Bad, and Indifferent, but too frequently in high schools anyone who can speak English is allowed to teach it. Ours is the first age in history which has asked the child what he would tolerate learning. In other ages the attention of children was held by Homer and Virgil, among others, but, by the reverse evolutionary process, that is no longer possible; our children are too stupid now to enter the past imaginatively.”

A little harsh, Flannery–but as usual, you’re probably right. (And she was talking about education back in the 1950’s!)

Hopefully, they inspire other procedures that will similarly become part of my students’ “practical, real-world knowledge.” Ultimately, I hope to make English class–including everything from Beowulf to Virgina Woolf–part of the “real world” for them.

5 thoughts on “English teaching and “The Real World””