In my previous post, I asked any of you who have ever been involved in school to take a brief survey. What do you think is the primary purpose of grades?

This is, in fact, the same survey that my principal sent out to his entire staff. And after reading and mulling over some of the research he presented to us, I realized that a lot of my grading policies were not reflecting the primary purpose of grades. In fact, I found myself really rethinking some of the grading practices I have always taken for granted.

It’s kind of a scary thing when you realize you might have to admit you were wrong about some things — especially if those things are integral to your profession.

Nevertheless I am really grateful to my principal for challenging me and my colleagues to rethink grading practices and to try to better align our individual classroom policies with the true purpose of grades.

Most of you said — correctly — that the primary purpose of grades is “to give feedback to students on their learning.”

The other options are important, but they are secondary.

Take this report card sample I showed my kids, for example: 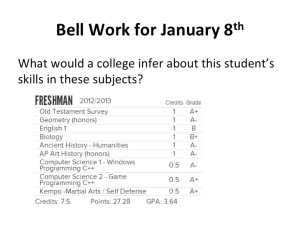 They all had had these experiences.

The students acknowledged that, from the report card alone, it is impossible to tell which factors influenced the grades.

Then we began a discussion of what grades should show. The most frequent answer I got, from my kids, was “how hard you worked.”

Interestingly, both struggling and strong students gave this answer.

“But what if you are really talented in Math, and you don’t have to work very hard to learn the concepts? Should I give you a C because you don’t need to work hard?”

They acknowledged this would not be fair.

“What about the student who always tries her best in English, but by the time of the test still doesn’t know what a thesis statement is or how to write one? Should she earn an A or a B just because she works hard — even though she doesn’t know the main idea?”

Some of them looked uncomfortable here, but again they agreed this would not be fair, either.

“Grades should show you what you have learned,” someone ventured.

There were murmurs of agreement.

“Okay,” I said. “I agree with you. Now, we’re going to be spending the next few days exploring this question — and I really need your help and input on this. If grades should be about showing what you have learned, what grading practices should we change in our class to help your grades better reflect that?”

And so the real discussion began.

7 thoughts on “Why I’m Changing my mind about Grades, Part I”