So I use “Fishbowl Discussions” in my English classes.

They are whole-class discussions in which an inner circle of students talks about questions related to a certain topic, and the outer circle observes, takes notes, and–in my version– can raise their hands to ask questions of people in the inner circle.

It’s called a fishbowl because it kind of looks like a fishbowl:

The thing with fishbowls is you need to have something to talk about. And in order to do that, the kids have to be prepared. So usually I give them a reading and create questions in the margins to help guide them and to help push them toward the objective. Then we discuss the questions in the fishbowl.

Sample from the text we discussed in class yesterday: 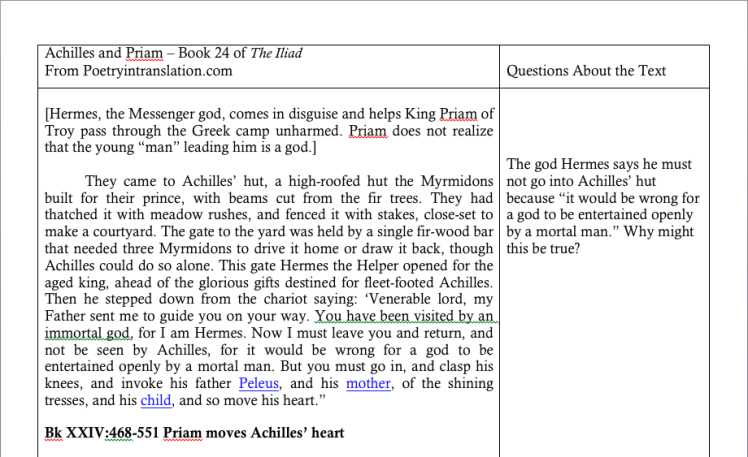 This system works pretty well, but I find myself having some doubts.

A lot of my questions are pretty basic comprehension level questions. I stick with lower-level questions because a huge number of my kids really struggle with basic reading comprehension. These questions help those kids identify a purpose for reading and help them focus on what is important in the text, but they tend to limit my stronger students. 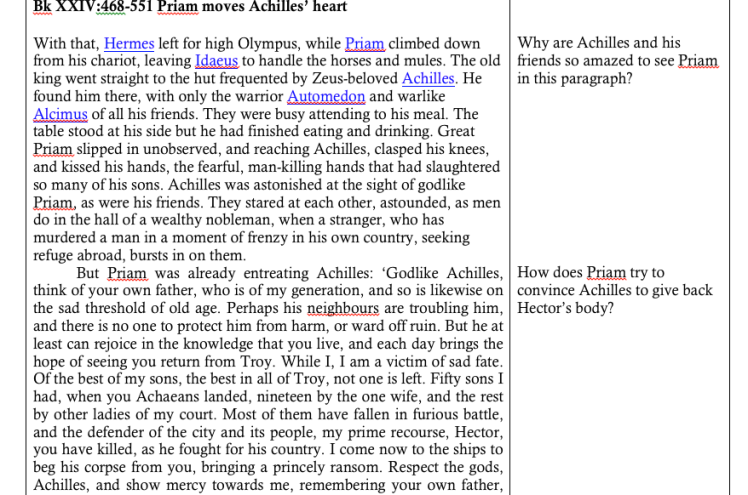 But my stronger students often are limited by these basic questions. They want to dig deeper, but the format I’ve established seems to limit them to the questions I have created.

One possible solution to this would be creating multiple versions– like include more advanced analysis questions for the stronger kiddos. But this solution wouldn’t work very well in a fishbowl when we’re all trying to answer the same questions together. And it would confuse the struggling kids who already have a hard time following along as it is.

Another solution, related to the first, is to keep the margin blank for the stronger students so that they create their own questions. But that would be really confusing for the struggling kids if they could not actually see the questions in front of them. It’s really hard for a lot of my kids to follow along with a conversation if they don’t have visual anchors.

Maybe I could give everyone two versions–one with the basic, anchoring questions, and one with a blank margin. They could read and answer the first version, and then in smaller groups they could create their own “higher-level” questions about the text after I had modeled examples for them.

Teachers – what are some other techniques you use to create meaningful discussions in your classroom?

The other evening I attended the Archbishop’s Lecture Series. Dr. Jonathan Reyes came and spoke about how to preach the Gospel in a skeptical age–and an age in which reasoned arguments no longer have much purchase.

Jenny over at Mama Needs Coffee has a beautiful reflection on his talk. An excerpt:

That’s the kind of love that speaks to a world grown blind to logic and deaf to reason. They might not believe in absolute Truth any more, but they can still perceive its counterpart, absolute Love. And from that encounter of being loved, of being valuable…a conversation can begin. (“My Little Lepers”)

She goes on to recount Dr. Reyes’ reflection on Mother Teresa. The reason the world loves Mother Teresa is because although it cannot comprehend faith very well, or the idea of “objective truth” (the phrase even makes me cringe a little), or rational argument, it is still attracted to beauty, for all of its infatuation with ugliness. And because Mother Teresa went to the ugliest human places with love, she reminded us of what real beauty is like. And the world noticed.

Dr. Reyes encouraged all of us to “get our hands dirty.” The world will not really listen to what Christians have to say anymore, but it is still watching us closely, and it may yet be moved by something beautiful.

Dostoevsky famously said, “In the end, the world will be saved by beauty.”

I thought about this in the context of my own world–my students. They are, as I am, products of a “skeptical age” that has lost the ability to reason. Our generation does not have the patience careful argument requires. Just watch the Presidential debates. We prefer slogans, soundbites, tweets, and hashtags.

I’ve noticed this countless times when I try to teach essay writing at the beginning of the year. Especially this year, I have been bewildered and discouraged by my student’s intellectual poverty–their struggle to form coherent thoughts, never mind reasoned arguments. Many of them still have a hard time wrapping their minds around what an “arguable thesis” even is. They can parrot back cliches and soundbites, but they cannot prove a basic claim.

It is my responsibility to try to teach them how to do this.

And yet, Dr. Reyes’ talk gave me pause. Maybe I am starting in the wrong place. Maybe I shouldn’t start off the school year with essay writing– essentially, teaching kids how to think and prove a point.

Maybe I need to start off the year with beauty.

Maybe they would be more open and eager to learn how to think, how to write, how to formulate a thesis and use evidence to support it, if they were at first struck by something beautiful.

I’m still not sure what that would look like. But I’m going to give it some thought.

I’m in the middle of a mythology unit with my kids and we’re learning about archetypes–recurring character and event patterns that show up in stories from all different cultures, times and places.

For instance, the orphan-turned-hero archetype: the young boy in the Native American Blackfeet myth we read, Harry Potter, Frodo Baggins, Superman, Batman, Spiderman, Jane Eyre, , even Luke Skywalker if you admit that Anakin is kind of dead, practically speaking.

Or the mentor figure who must die/disappear so the hero can become a hero: Gandalf, Dumbledore, Obi-Wan Kenobi, Glenda the Good Witch.

Or the flood myth archetype: Noah and the Ark, Utnapishtim in The Epic of Gilgamesh, Deucalion and Pyrrha in the Greek story, and stories in practically every culture on this planet.

Or the hero’s journey archetype. Here’s a fun video we watched in class about that:

Or, perhaps more provocatively, the dying and rising godlike hero: the Egyptian Osiris, Babylonian Tammuz, Greek Persephone, Hercules going to the Underworld and bringing Theseus back, Odysseus, Aeneas… and Gandalf the Grey coming back from the dead as Gandalf the White, and Aragorn passing through Dunharrow.

And, of course, Jesus.

One of the essential questions we are considering in this unit is What do Archetypes Suggest About Human Nature?

Well, what they suggest about human nature is that such a thing actually exists– and that human beings all over the world are caught up in the same search for meaning and often come to surprisingly similar answers.

Archetypes suggest there may be eternal truths about human beings. The stories we tell are similar because we are all similar. Among these standards are moral standards that all cultures recognize but some cultures realize more fully than others do.

And there you go: Backdoor Natural Law Theory. Sort of.

Next up on the unit plan: Is Christianity just another myth?

I mean, it is pretty similar to a lot of other myths. Sometimes uncannily so. There’s the whole scapegoat archetype thing going on. And isn’t Jesus basically like the half-god, half-human heroes of old? And doesn’t that prove that Christianity just adopted other mythologies and so basically our God is just an updated Zeus, or something?

We’ll have some interesting discussions, for sure. But to guide us, we will be reading excerpts from C. S. Lewis’ “Myth Become Fact.”

Now as myth transcends thought, incarnation transcends myth. The heart of Christianity is a myth which is also a fact. The old myth of the dying god, without ceasing to be myth, comes down from the heaven of legend and imagination to the earth of history. It happens-at a particular date, in a particular place, followed by definable historical consequences. We pass from a Balder or an Osiris, dying nobody knows when or where, to a historical person crucified (it is all in order) under Pontius Pilate. By becoming fact it does not cease to be myth: that is the miracle. (Lewis, “Myth Become Fact”)

This is going to be a bit mind-boggling for some of my kids, but I think it’s worth a try.